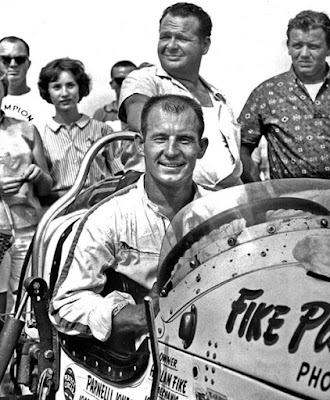 Salem, Ind. (September 4, 1960) – Parnelli Jones of Torrance, Calif., won the USAC 100-lap sprint car race at Salem Speedway on Sunday afternoon. The grueling 95-degree heat took its toll on drivers as only six of the 16 starters completed the race.

Jones took the lead at the drop of the green flag and never gave it up.

Roger McCluskey of Tucson, Ariz., was second and Ronnie Duman of Roseville Mich., was third. Don Branson of Champaign, Ill., had held down the runner-up spot for more than two-thirds of the race but was forced out of action on lap 81 when he dropped a valve.

Jones piloted a Chevrolet-powered sprint car. Most of the dropouts were due to overheated engines. Jones reduced his speed towards the end of the race as he had a one-lap lead and he feared his car might succumb to the heat.