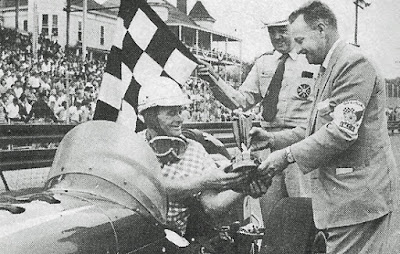 Amick won the feature race for the second year in a row by capturing the lead on lap 11 of the 25-lap and running like a scared jack rabbit the rest of the way to assure the victory.

A crowd estimated at more than 9,000loved every minute of it, and responded with a tremendous ovation for the little redhead out of Muncie, Ind., as he picked up the checkered flag.

Wayne Alspaugh held the lead in the feature for the first 10 circuits but dropped to second on lap 11 when Amick made his move, and narrowly escaped with his life on the 12th lap.

Alspaugh was trying to recapture the lead and came high off the dangerous turn four when he blew his right front tire and went smashing into the guardrail at top speed. While the huge gathering held its breath and waited, Alspaugh hopped out his car with a big smile as if he had just won the race. As someone mentioned, he may have been smiling because he was alive.

A restart was necessary with Amick in the lead followed by Jim Packard and Bobby Grim, a man many expected to win. But Grim on asphalt is like the Washington Senators in baseball; He’s in the big leagues but that’s about it.

Grim has won just about everything in sight this season on dirt tracks but he just can’t go on asphalt. Promoter Al Sweeney said, “He didn’t even want to come. I made him.”

Despite his sad showing, he backed into third place when two of the men running in front of him came up with car trouble. Alspaugh had his accident and Pete Folse, who had the fastest time in qualifying on Friday, and tire trouble on lap 8 and dropped out of the picture.

One reporter asked Amick if he liked the track. He drew a big laugh when he answered, “How could I help but not like it?”