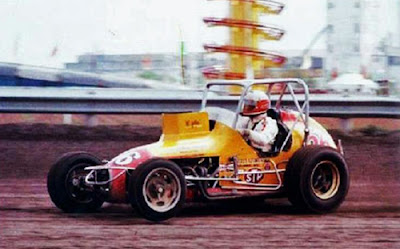 Lincoln, Neb. (August 31, 1974) - Bill Utz fought off a threatening challenge from Earl Wagner to win the 30-lap feature at the Nebraska State Fair on Saturday afternoon.

Utz, of Sedalia, Mo., started eighth on the grid and worked his way into the lead on lap 7 when he flew by Jan Opperman, who could not regain the lead from last year’s Nebraska State Fair champion.

Wagner came from even farther back in the pack to a challenging position for the lead on the 15th lap and pressed Utz until the finish but could not get closer than one car length.

For Utz the win meant that he overtook first spot in the IMCA point standings from Larry Kirkpatrick who had just taken the top post from Utz last Sunday at the Iowa State Fair.

"This track is really tough, there are some holes and deep grooves which can throw you an over but if you stay high in the turns, the ride is smoother," said Utz.

Wagner, of Pleasantville, Iowa, also found the high groove to his liking but gathered so much flying dirt from Utz’s sprint car that he could not find the room to pass the leader.

“I got so much dirt in my eyes that I couldn't see any way around Utz, so I figured I would just hang back and wait for him to bobble,” said Wagner.

“This track has some strange parts to it,” Wagner continued, "some parts that are tacky and some slick, besides some deep grooves,” he concluded.

Many drivers found that the track took some, kid-gloved handling.

Ron Fisher suffered a broken kneecap in an accident in the first turn when his car caught a groove and flipped end over end landing upside down.

Later, in the feature race Jim McVay lost control in the same spot and flipped but suffered only minor injuries.

started for the race. Two National Guardsmen suffered minor injuries in the rear-end collision and Kinney’s car was out for the rest of the day.