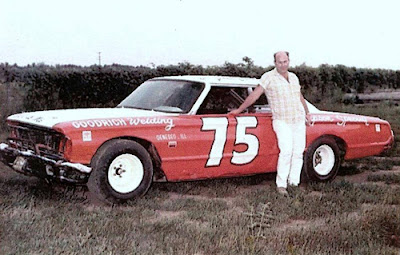 An enthusiastic crowd of 2,700 watched John Connolly drive a 1964 Ford to victory in the anticlimactic feature. He towed home to Delhi, Iowa, with $525 and a sparkling championship trophy.

Connolly sputtered through a couple of wasted time trials before his machine warmed up. His final time trial was the fastest of the night and gave him the pole position for the feature.

The balding Connolly dropped behind only once in the mishap-free feature but took the lead for good on lap 7 and was never headed, pulling away from the rest of the talented field.

Phil Prusak, a weekly competitor out of the Twin Cities, came in second, half a lap behind Connolly. Prusak driving a ‘66 Chevelle, pocketed $450 for his performance.

Mueller, one of the Midwest's most respected drivers, had the windshield of his ’67 Chevelle collapse during the fourth lap of the feature and he was forced to hold it up with one hand the rest of the way.

Driving one-handed, Mueller still managed to hold his own through the 40-lap event but was in no position to gain ground on the leaders. He still wound up fourth and pocketed $315.

Steffen, probably the hard luck driver of the night, was driving a fine race and running fourth when his ’66 Chevelle spun out on the last corner in sight of the finish.

Connolly and Bob Jusola, Minneapolis, started the 20-car feature in the front row but Dave Noble, Blooming Prairie, Minn., shot ahead in his ‘65 Chevelle, on the third lap.

But Noble developed problems on the seventh lap and dropped out, Connolly taking the lead back, not to relinquish it again

John Johnson, Duluth, was running among the leaders in his ’67 Dodge, spun out on the 15th lap and Prusak moved into second on the 19th lap. Steffen took over third place on the 22nd lap but dropped back to fourth a few laps later.

Jusola, driver of a ’65 Chevelle, was still battling for the lead when he went out on the 30th lap.

Darrell Dike, Cedar Rapids, Iowa, was running third on the next to last lap when he went out, followed by Steffen.


Taking advantage of the situation was Dave Morgan, Rice Lake, who took his ‘67 Corvette to a third place finish good for $375.

In fifth place, behind Mueller, was Bud Havel, Rice Lake, driving a ‘60 Corvette.