1966 – Wet Victory for Blundy in Futurity 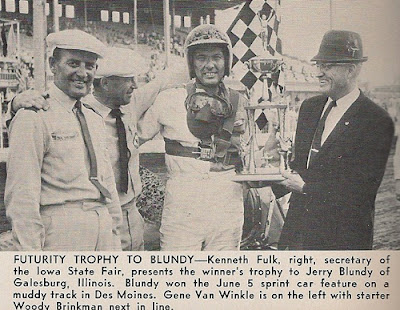 Des Moines, Iowa (June 5, 1966) – Jerry Blundy of Galesburg, Ill., whose weekend hobby is racing, won the renewal of the Hawkeye Futurity on Sunday in a rain-delayed program before some 5,500 fans.

Finishing behind the 40-year-old air conditioning engineer cam Jim Moughan and Chuck Lynch, both of Springfield, Ill., followed by Bill Puterbaugh of Roxana, Ill., in a surprise fourth.

Puterbaugh was far down the list after time trials and did not place in any of the preliminary heats. But he managed to slip into the last row of the field for the 30-lap feature as the fourth alternate.

Blundy was something of a surprise himself as fast timer after qualifications but failed to place until he won the 12-lap consolation. He then wheeled to a track and Futurity record of 12 minutes and 53 seconds.

The old mark for the half-mile dirt oval, in the book since 1953, was by Bob Slater in an Offenhauser. Since it was the first time the 15-mile feature was staged without a caution, the time was well under a 14 minute, 53 second time set by Johnny White of Warren, Mich., in the 1964 Futurity.

White, the ’64 Futurity winner, was in the pits Sunday afternoon as a car owner. Now paralyzed from the neck down as a result of a crash in 1964, White’s luck wasn’t much in his debut as a car owner. His Offenhauser-powered rig, driven by Jay Woodside of Wichita, Kan., blew a piston early in the contest.

An early morning rain turned the newly refinished Iowa State Fairgrounds into a muddy quagmire. Sporadic showers threatened to wash out the entire program but IMCA officials managed to get the first race off.

Blundy, a front-row starter alongside Moughan, headed his Illinois rivals by five car lengths most of the way in the caution-free race. The rest of the field was a quarter-mile back or more back from the familiar looking red #33 Chevy.

Beale, the recent winner of the prestigious Little 500 in Anderson, Ind., went to the sidelines in his Kenny Lay Chevrolet on lap 18 with Richert ahead of him.

However, Richert wasn’t concerned with Beale’s whereabouts at the rear of the 20-car field since all he had all he could manage with teammate and veteran Jerry Daniels of St. Paul, Minn.

Daniels, also driving a Frank Wagner Chevy, was on Richert’s exhaust stack all thee way until both he and Richert were forced out on lap 25 with overheated engines as a result of mud-clogged radiators.

The teammates had worked their way up to fourth and fifth after starting in the sixth and seventh rows. Richert earned $25 for his afternoon of work, notching last place.

The race was worth $500 to Blundy plus another $90 for being fast timer and consolation winner.