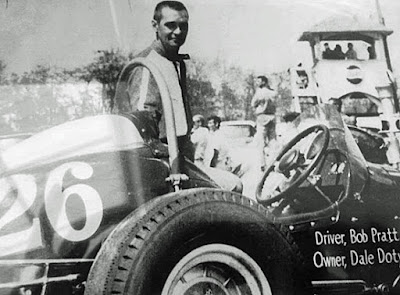 Winchester, Ind. (June 7, 1964) – The hot-driving chauffeurs of the International Motor Contest Association (IMCA) went on a record-breaking binge Sunday afternoon before 4,300 race fans at Pete Wales’ world-famous, high-banked Winchester Speedway as they shattered four existing sprint car marks and came within one-hundredths of a second in breaking a fifth.

Indiana’s Bob Pratt, the fastest qualifier of the day with a one-lap time of 17.61 seconds, just one-hundredth of a second off of Johnny White’s world record for a half-mile, high-banked asphalt oval, wheeled the Vivian Buick Special, a Chevy-powered machine owned by Dale Doty home first in the 30-lap feature after a red-hot duel with another Hoosier, Red Amick.

And, despite the fact the feature was run under the yellow flag for two laps, Pratt was clocked in 9 minutes and 16.49 seconds, for the 15-mile run, to erase the from the record books the mark of 9 minutes and 17 seconds for that distance set on October 6, 1963.

The first record to fall on the program, run under the sanction of the International Motor Contest Association and under the supervision of National Speedways, Inc., and the direction of vice-president Gene Van Winkle, was in the 8-lap heat race when Dick Gaines, driving the Diz Wilson Chevy, withstood a desperate challenge by Pratt, Dick Good and Muncie’s Bob King all the way to roar home in 2 minutes and 26.44 seconds, which wiped out Johnny White’s mark of 2 minutes and 29.41 seconds set on June 23, 1963.

Dick Good got into the act when he won the 5-lap trophy dash in 1 minute and 31.20 seconds, eclipsing the old mark of 1 minute and 31.49 seconds for that distance set by Jim McCune on May 10 of this year.

Then, in the 10-lap semi-main battle, Amick continued the assault on the record book by wheeling the Abbott Chevrolet home first in 3 minute and 5.7 seconds to wash out the mark of 3 minutes and 7 seconds set my Tom McClellan on July 22, 1962.

Amick, starting on the outside of the front row, went high into turn one at the start of the feature and edged by pole-sitter Pratt to grab an early lead with Good running third and Bud Randall holding down fourth.

Randall ran into mechanical difficulty on the second lap and had to leave the race, and then, on lap 9 on the half-mile oval, Serg Tesolin, in the Fayot Lotus Ford, lopped coming own the main chute, spun into the pits and out of the race.

Pratt caught up with Amick in the fourth turn on lap 16 and went under the Muncie redhead and into the lead he never relinquished.

And what would have been a four-horse race for first-place money up to that time, disintegrated as both Good and Gaines also got bound up with other cars and fell far behind the leaders.