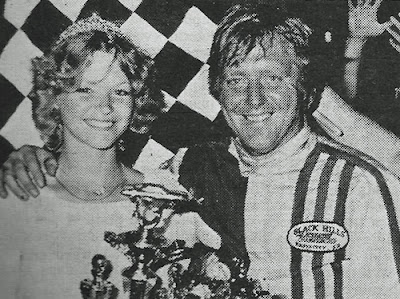 Alta, Iowa (June 28, 1978) – For Bob Shryock, you knew it had to happen before too long. The Estherville, Iowa, race veteran put it all together Wednesday night and walked away with the top prize in the fourth annual “Race Days” special at Buena Vista County Raceways.

“This is our first win of the season down here,” said a fatigued but happy Shryock following the win. “It’s a great win for the guys who work on the car all week, and for our sponsors.”

Shryock, driving a Camaro, started the race on the inside of the fourth row, and patiently worked his way into the third position by lap 7. On the following lap, Bill Martin of Council Bluffs, Iowa, lost a front bumper coming out of turn four, puncturing his oil pan and forcing the red flag to come out.

On the ensuing restart, the crafty Shryock sailed past early leader Arnie Braland of Boone, Iowa, and second-place Tom Bartholomew of Waterloo, Iowa, to take the lead, a position he would hold the remainder of the 30-lap event.

“The car worked well up there tonight,” commented Shryock of his move on the restart. There was a little bump between turns one and two, and I was able to work on the high side, while Arnie and Tom stayed down low. The car stuck in there real well for me.”

From there on in, it was a two-car sprint to the finish, with Shryock holding off Braland’s Camaro for the bumper-to-bumper victory. Bill Rice of Des Moines, winner of the 1975 “Race Days” finished third while Bartholomew took fourth. Waterloo, Iowa’s Dan Nesteby rounded out the top-five.