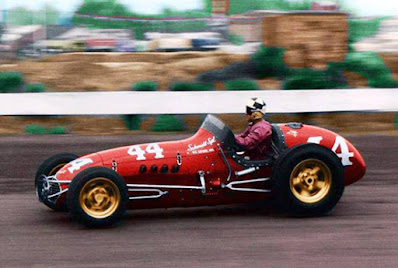 Sachs, who was among the front-runners at the start, overtook Jud Larson on lap 62 and then breezed across the finish line with an average speed of 91.977 miles per hour.

However, Sachs’ chances of establishing a new Langhorne 100-mile standard were wiped out on the 23rd lap when Johnny Boyd’s car burst into flames after passing the grandstand.

Boyd managed to leap from the car, but firemen were unable to extinguish the blaze, which lasted well more than an hour. Boyd was taken to a local hospital where he was treated for burns on both legs.

Following the fire, the caution was raised for 20 laps, thus preventing the field from lowering Don Freeland’s century time of 112.873 miles per hour set in 1955.

Finishing in second place was A.J. Foyt who was followed by Jud Larson, Don Branson, Tony Bettenhausen and Don Freeland.

Johnny Thomson of Boyertown, Penn., the winner of last year’s Langhorne 100-miler, blew out a tire early in the race and failed to challenge the leaders.

Sachs won the Langhorne classic driving the Peter Schmidt Special, the same car he qualified at Indianapolis with an average speed of 144.669 miles per hour.

Bettenhausen was awarded fifth-place money after considerable discussion by the Langhorne stewards. By being placed fifth, Bettenhausen picked up 100 championship points, boosting him ahead of Jimmy Bryan, who won the 500-mile Indianapolis Memorial Day classic.