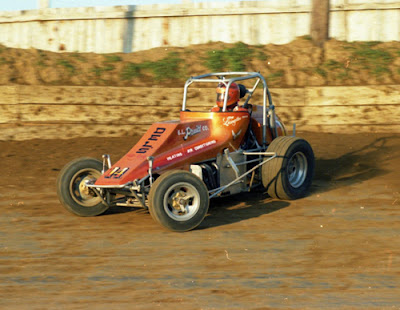 Shirley’s most serious threat evaporated on the ninth circuit of the 30-lap contest, when defending division titlist Sheldon Kinser, who was running second on the inside and gaining on the leader, jumped the cushion and hit the fence in the fourth turn.

The incident obviously disturbed the handling qualities of Kinser’s Chevy and dropped him back to a seventh-place finish.

Shirley, who started on the pole, stayed in the low groove all the way and won with relative ease over runner-up Larry Rice.

Rich Vogler came up with a great outside-groove drive from his 17th starting position to finish third despite nudging the fence between turns three and four midway through the race.

Dick Vant escaped injury when he rolled his Chevy in the first turn on the opening lap of the second heat.