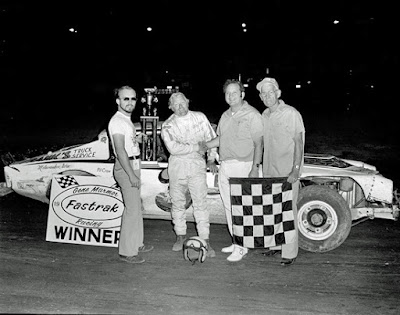 Making his first appearance on the clay oval, Harris took home $1,100 for his efforts.

Ed Ferrell started the 50-lap main event from the pole position and led the 25-car field through the initial 23 laps. However, engine problems sidelined Ferrell on the 24th circuit, giving the lead to Harris with Englekins, Tony Izzo and Gardner close behind.

Izzo made a move aimed at taking the lead on lap 29, but wound up spinning into the infield, where he then threw a mild temper tantrum to the delight of his non-fans.

With Harris enlarging his lead as the event wound down, Gardner snared the runner-up spot from Englekins on lap 37. However, Gardner’s bid to catch Harris would be too late.