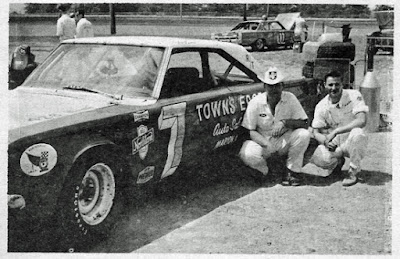 John DeKlotz of Shellsburg gave Eaker the opportunity he needed when he spun out on lap 8.

As Williams avoided DeKlotz, Eaker slipped down on the inside and shot into the lead he never relinquished. Hilmer finished second with McDonough in third and Williams in fourth. Lem Blankenship of Keokuk rounded out the top five.

The second 50-lapper was held after a 15-minute cooling period and an inverted start was used, according to the way drivers finished in the first race.

Shortly after the field saw the green flag, Williams tangled with Fred Horn of Marion, and a little later, Gale Card of Waterloo went over the wall and rolled over. This stoppage gave Williams and his crew enough time to replace a radiator in his car, much to the delight of the fans.

Eaker, meanwhile, put on a driving display, going from his 21st starting position to the front by the midway point and distancing himself from the rest of the field for the remaining 20 circuits.

Trailing Eaker to the finish was Roger Dolan of Lisbon, and Williams, who also had to come from the rear of the field, finishing third. Ed Sanger of Waterloo was fourth and Bob Hilmer came in fifth.