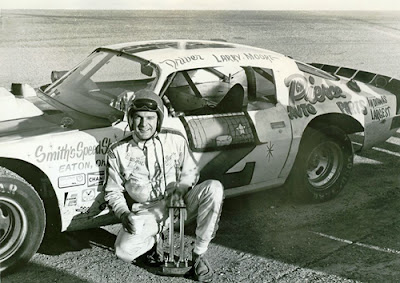 Dayton, Ohio (June 27, 1976) – What started out as an eight-way duel ended up as a ding-dong two-man battle between Larry Moore of Huber Heights, Ohio and Bob Senneker of Dorr, Mich.

Neal Sceva of Urbana, Ohio, paced the main event for 15 laps on the high-banked, half-mile asphalt oval before the motor let go in his 1970 Mustang and he was out of business.

Rodney Combs of Mason, Ohio, who had his Don Thompson-prepared 1973 Camaro in second spot all the way, grabbed the lead at that point, followed by Senneker, Moore, Jerry Makara of Westland, Mich., John Anderson of Warren, Mich., and NASCAR ace Bobby Allison of Hueytown, Ala.

On lap 25, Moore shot his 1973 Camaro, another Thompson-owned machine, around both Senneker and Combs to take the lead. Combs held on to second with Senneker running third.

The running order was altered on lap 29 when Anderson went to the sidelines with a sick engine.

Moore held a substantial lead with Combs and Senneker battling for second until Combs’ machine began overheating and he headed for the pit area on lap 52. He later returned to action but ran only a total of 64 laps before being sidelined for good.

Senneker then set sail for Moore and even though he was banging on Moore’s bumper the final 40 laps of the chase, he couldn’t overhaul the hard-charging Ohioan.

Mike Eddy of Kawkawlin, Mich., who had been in the top five almost al day following Sceva’s departure, wound up third, one lap behind the two frontrunners, and gained enough points to take over leadership of the ASA point’s battle.

Ray Fullen of Anderson, Ind., five laps down at the finish, took fourth with Glen Ohlmann of Louisville, Ky., winding up fifth.

Moore was fast qualifier in time trials with a one-lap clocking of 17.808 seconds.