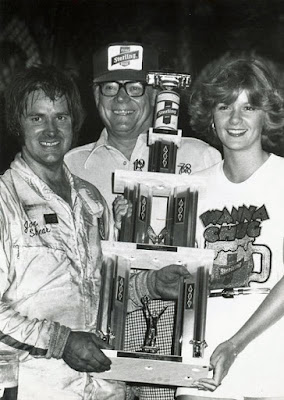 Joe Shear accepts his trophy after being named overall winner of the ASA Bluegrass 300.

Shear won the first of three 100-lap segments, then placed fifth and third, respectively, in the final two segments which were both won by Dick Trickle. However, a point system, rewarding the best average finisher in all three events, gave Shear the overall win and $2,570 from a purse of $13,255. Dave Roahrig was second in the overall standings and John Anderson was third.

The first 100-lapper was the most exciting of the evening.

Fresh from setting a new track record in qualifying with a time of 14.622 seconds around the third-mile paved oval, Jerry Makara charged from his pole position to claim the early lead.

Makara, driving a recently-completed Camaro, which was still in primer, was hounded by Mike Eddy until lap 86 when the two cars drew even, touch and rebounded with Makara ending up sideways and immobile.

With the two-time Bluegrass champion recovering from the spin, Eddy took over first place with Dave Watson right behind.

On lap 91, Eddy found himself joining Makara when Watson clipped his bumper going into the backstretch, sending Eddy into a tire-smoking, full-throttle 360-degree spin and out of first-place.

Just three laps later it was Watson’s turn to learn the law of the jungle. Shear, who had rebounded from an early spin which had dropped him far behind, pulled up on Watson and executed a “bunt” on the frontrunner’s bumper, sending Watson spinning into the infield.

Shear took the lead when Watson spun and held the top spot to the checkered for the win. Watson recovered to finish second with Eddy third, Mark Martin fourth and Roahrig fifth.

Trickle was a mechanical casualty in the first 100 pulling into the infield with his Camaro ablaze, apparently from a ruptured fuel line on lap 7. Rapid fire crew work quickly extinguished the blaze, but Trickle was faced with a formidable repair job in order to make the second 100-lapper.

With the field completely inverted according to the finish of the first race, Trickle enjoyed the pole position in the second 100.

Charlie Glotzbach, who started behind Trickle, managed to surge around Trickle on the start and lead the first 29 laps until the Wisconsin ace found the outside groove to his liking and took over the top spot.

The remainder of the race went without a hitch for Trickle. Glotzbach hung on for second-place followed by Don Gregory, John Anderson and Shear.

Trickle was invincible in the final 100, taking the lead from the pole position and eventually lapping every opponent except Roahrig and Shear, who placed second and third, respectively. Watson was fourth and Bob Strait fifth.

Despite the two segment feature wins, Trickle finished eighth in the overall tally.

“That’s the break of the game,” Trickle said after the final 100

“We would’ve had a good overall finish except for the first race. I just wanted to get the car fixed and put on a good show for all of the fans.”