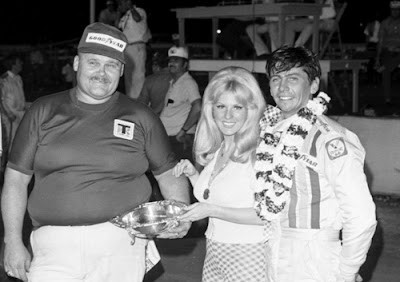 Indianapolis, Ind. (June 8, 1973) – Billy Shuman and Don Nordhorn both fought off challenges from Rollie Beale to win their first sprint car features of the year at the Indiana State Fairgrounds Friday night.

It was the first win ever in USAC for the 25-year-old Shuman, who piloted the Willie Davis sprinter.

Greg Leffler started the evening by driving into thee first turn too deeply and losing control. He flipped several times, wiping out the front end. Steve Cannon lost his steering on the 7th lap of the first 50-lapper and hit the fence in turn one. Cannon suffered a broken toe.

Tony Simon went into the first turn too deep and lost control of his car, flipping several times with the front end over the outside wall.

Bruce Walkup then lost a right rear wheel as the pins sheared and was high between turns three and four. Bill Puterbaugh was in the high groove behind Walkup and hit his car, flipping both of them.

Cannon led the first 17 circuits before a fast-charging Carter caught him and led until engine failure sent him to the sidelines.

Nordhorn charged from his eighth starting position to take the lead and hold off several challenges from Beale. However, it wasn’t Beale’s night and he finished three car lengths behind the winner.

The point leader going into the event, Lee Kunzman, drove for Chuck Booth and finished 27th in the first feature. He drove his own car in the second feature and finished 12th. Beale, by finishing second in both features, took over the point lead.