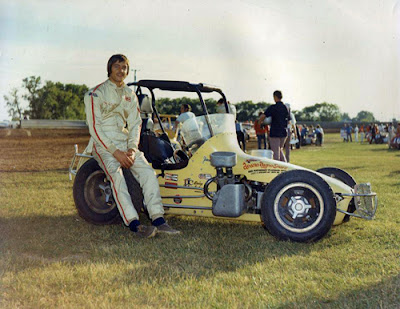 Astone, 23, a native of Fresno, Calif., was one of 27 midget racers making their first appearance in southeast Iowa. The racers gave the crowd of 500 a taste of true professionalism with an exciting finale.

Astone, the division’s 1972 Rookie of the Year, captured his first midget victory ever as he powered his way to the lead in the next to last lap of the final event.

Early leader Billy Engelhart of Madison, Wis., spun his way out of the lead in the 39th lap allowing Astone to coast in.

No winning time was given for the event as Russ Staab of Cincinnati, Ohio, spun in the middle of the track forcing the yellow flag to slow the field.

The temporary halt allowed Astone to make a move on Englehart, who had kept a strong lead throughout. The momentary pause also enabled midget division point leader Larry Rice of Crawfordsville, Ind., to gain on the leaders from the middle of the pack and take over third position.

Rice, who leads with 281 points, remained in third place finishing just ahead of a disappointed Engelhart. The runner-up spot went to Bob Olivero of Lakewood, Calif., who jumped from sixth in the pack.

“I’m just glad to have finally won,” Astone said. “Now I hope I can keep it up and prove myself.”

“We knew that we had a good driver in Tommy all year,” Doug Caruthers said. “He just needed a chance.”

Caruthers, a 35-year veteran of racing, is the father of Jimmy and Danny, who won National Midget Titles in 1970 and 1971, respectively.

Now the team has found a new face to add to the list of champions.

“I had a real dog-fight with Billy (Engelhart),” Astone added. “I didn’t think I’d ever catch him. He did a fine job; I was just lucky.”

The victory gave Astone 180 points for the season and a hold on fourth place in the national standings.

The absent Caruthers held down second place in the standings at 191 points, just ahead of Billy Shuman of Tempe, Ariz., who finished sixth in the feature.

National defending champion Duane “Pancho” Carter of Huntington Beach, Calif., saw his chance for a spot in the main event evaporate when his Sesco Chevy blew a wheel bearing following a victory in the second heat.

Jerry Howe of Clarks Hill, Ind., was the only driver to encounter difficulty with control. He spun off the 3/8-mile dirt track over a retainer wall and through a wooden fence on the third turn of the second lap in the semi-main event. Howe did not flip his vehicle and was not injured.