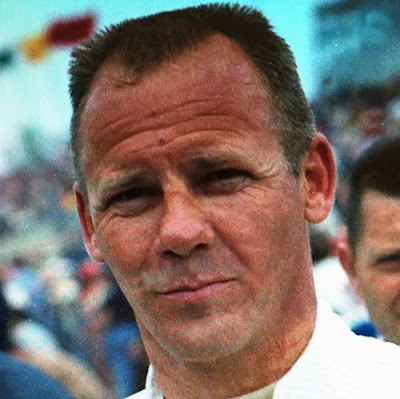 
West Allis, Wis. (June 9, 1968) - Death waited less than three minutes for Ronnie Duman Sunday. It claimed him at the south wall at the start of the third lap in the 150-mile Rex Mays Classic automobile race.

The race, won by Lloyd Ruby of Wichita Falls, Tex., continued after Duman, 36; Norman Brown, 31, who was critically injured, and Bay Darnell were taken to a hospital. Darnell escaped with relatively minor burns.

But the south wall bore the scars of the flaming crash - which injured six spectators - and Duman’s young son, Dick, sobbed unconsolably at his mother's side.

A native of Dearborn, Mich., Duman began as a stock car driver in 1951. He was severely burned at the Indianapolis 500 in 1964. The same accident claimed the life of drivers Eddie Sachs and Dave MacDonald.

Just before Sunday’s race, Duman met a newsreel photographer who helped rescue him from that fire. “Sure, I remember you,” he reportedly told the cameraman. “You’re my best friend.”

Duman, a friendly man who wore the scars of that accident on the left side of his face finished sixth in the 500 last month, his best showing in eight years of trying for the big prize.

Duman, Brown and Darnell who began the race far back in the pack of 24 cars, came together in a searing crash as the field jockeying for position just seconds after the fall of the green flag.

Duman’s car sailed off the asphalt, overturned in the air, and shattered against the wall. His helmet, split by the impact, rolled away as Brown and Darnell also converged on the wall.

The race had been billed as a further test of Andy Granatelli's turbines against the orthodox Fords and Offenhausers.

But a turbine driven by Art Pollard was black flagged to the sidelines on the 64th lap when a judge ruled it was leaking oil.

A second turbine, driven by Joe Leonard went to the pits after losing a wheel on the 38th lap.

Ruby took the lead from second place finisher Mario Andretti, Nazareth, Penn., on the 108th lap and won by 2.6 seconds with a speed of 100.739 miles per hour in his turbocharged Offenhauser.

The race was delayed 33 minutes while the wreckage was cleared. Then the chase resumed, with five other drivers, including the turbo dual, taking the lead at different points.