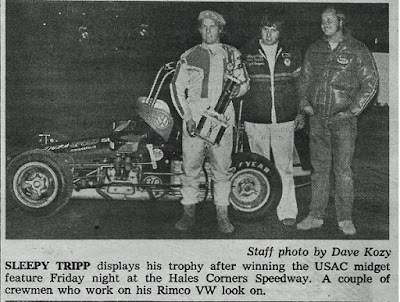 Franklin, Wis. (June 10, 1977) – Sleepy Tripp of Costa Mesa, Calif., is not one to rest on his laurels. The defending two-time USAC midget national champion scored an easy victory in the division’s 40-lap main event at Hales Corners Speedway on Friday night, to gain valuable ground on current point leader Gary Bettenhausen of Moravia, Ind., who could do no better than fifth place in the race.

The feature win was Tripp’s second at Hales Corners. He had won previously on August 15, 1975.

Rich Vogler of Glen Ellyn, Ill., grabbed thee feature lead at the drop of the green flag. But his lead was short-lived as Tripp slipped by him on the inside as the pair exited turn four at the conclusion of lap 1.

Even though Tripp never led by more than seven car-lengths in the remaining distance, his grasp on the top spot was a firm one.

Kenyon, of Lebanon, Ind., a former four-time USAC midget national champ, set a new track record in qualifying with a time of 17.577 seconds around the one-third mile dirt oval. Kenyon had set the previous record of 17.644 seconds on August 15, 1975.

Gary Bettenhausen punched his ticket into the main event by winning the 12-lap semi-main.