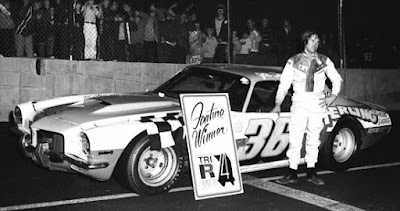 Joe Shear was the overall winner of the La Crosse 150.


West Salem, Wis. (June 2, 1974) - Joe Shear of South Beloit, Ill., lost some ground on a yellow flag late in the race, but retained enough of a lead to hold off Bob Senneker to win the final 50-lapper of the afternoon here yesterday during the La Crosse 150 late model stock car race at the Interstate Speedway.

Senneker, of Dorr, Mich., won the first 50-lap segment of the afternoon’s racing with Dick Trickle of Wisconsin Rapids taking the second 50-lapper.

Trickle moved into the lead on the seventh lap of the feature race but went to the pits two circuits later with a broken cylinder wall.

Tom Jones of Northbrook, Ill., then held the lead for the next four laps before Shear passed him and second-running Dave Watson of Beloit to boom into a lead he would never relinquish Shear got pressure from Johnny Reimer of Caledonia, Wis., who held second place from the 19th through the 44th lap when his Camaro blew the engine and he hit the wall, bringing out a yellow flag.

Reimer was unhurt but Senneker gained second place on the restart with two already lapped cars between him and Shear. Senneker quickly overtook the two slower cars and battled Shear through the remaining laps, only to lose out by about three car lengths at the checkered flag.

“I was running well, but I knew Senneker was coming hard the last few laps, said Shear of the third race. “I was slacking off a little at the end.”

Marzofka held second until lap 40 when Reimer took over and held it for the rest of the way Reimer was a close second at the finish, one car length behind Senneker while Marzofka was a scant three lengths off the leader's tail. Somers placed fourth with Bob Jusola of Minneapolis fifth.

In addition to his 50-lap victory, Senneker set a track record as the day's fastest timer with a 20.881 qualifying lap Trickle took the lead from Mike Miller on the 27th lap of the second 50-lap race when Miller went to the pits with mechanical problems.

Trickle's 1970 Mustang held off Shear for the remainder of the race. Following Shear was Butch Miller third, Detjens fourth and Bill Oas fifth.

Steve Arndt of Janesville, Wis., piloted his ’67 Chevelle to the 15-lap consolation as he led from flag to flag after starting on the outside pole position. La Crosse's Ralph Bakewell was second with Larry Behrens of Northfield, Minn., third, Tom Greenlee and Gary Hemmerling rounded out the top five.

A Tri-R Promotions official set the attendance figure at 4,700.