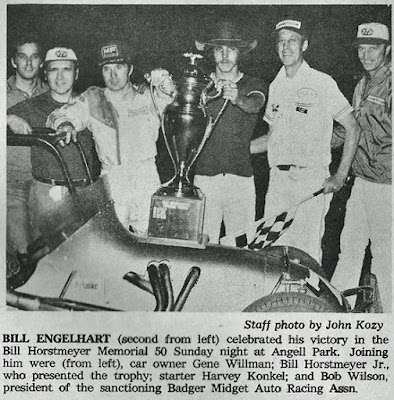 Sun Prairie, Wis. (June 22, 1975) – Making only his second start of the year in Badger Midget Auto Racing Association competition, Bill Engelhart roared to victory in the rain-postponed Bill Horstmeyer Memorial 50-lap feature Sunday night at Angell Park Speedway. Rain threatened again, but the showers held off and the show was completed without a hitch.

Former Badger champion Bob Walldan caught early leaders Greg Nelson and Gary Schooley, while Engelhart moved up from his seventh row starting spot. The popular Madison, Wis., speedster found running room on the inside and caught up with Walldan. The pair battled wheel-to-wheel for several laps before Engelhart got the edge on lap 35. Engelhart won by three car lengths over Walldan. Nelson was third, followed by Paul Clark.

Kevin Olson had earlier set the fast time of 16.905 seconds on the third-mile clay oval in the Willman Sesco, but gave the car up to Engelhart, when the latter returned to a sprint car show at Winchester, Ind. This had been agreed upon before Olson’s qualifying run.