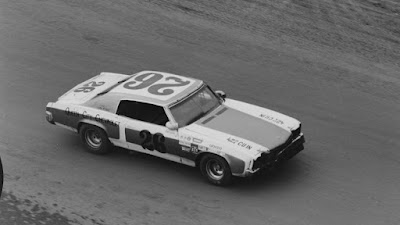 Roger McCluskey set an Action Track record in qualifying for stock cars, recording a time of 26.18 seconds, eclipsing the old mark of 26. 24 seconds set by A.J. Foyt in 1968. Then, with 22 cars in the field for the 100-lapper, quickly took the lead.

He held the top spot until lap 28 when Al Unser took over. Unser held the lead until the 93rd circuit when he dropped out of the running and Latham, who had been running second or third all race long, took over and coasted the remaining seven laps to take the checkered flag.

Latham remarked afterwards that he ran most of the race without brakes.

McCluskey dropped out of the race on lap 60 when handling problems became too severe, while Bobby Unser was out shortly before that with overheating problems.

Both Unsers, McCluskey and Gordon Johncock — all Indy 500 veterans — were flown in from Long Pond, Penn., when rains halted time trials for the Pocono Schaefer 500-mile race until this Thursday and Friday, if then. Johncock was still running at the finish and took 11th place.

Paul Sizemore of Terre Haute, who ranked ninth in the USAC point totals, didn’t hurt himself by finishing 10th in the feature and taking top honors in the 10-lap semi-feature.

Missing were Jack Bowsher (3), Verlin Eaker (4), Sal Tovella (6), and Don White (7). Terry Ryan, who was 7th, was at the track but withdrew because of mechanical issues before qualifications.

Bay Darnell, with his runner-up finish, took over the USAC point’s lead.