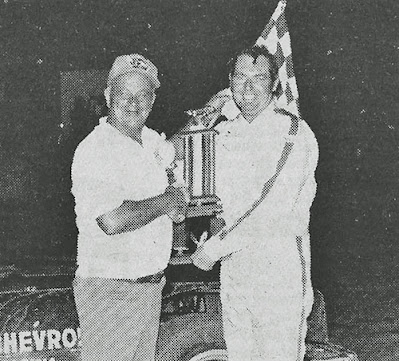 Because rain had forced postponement of the features from the previous weekend, double features were slated in both classes and Crawford, who already was the late model point leader, won both late model events.

In the makeup race, he edged Carl Severson of Dubuque, who was followed by Jim Burbridge of Delhi, Joe Schaefer of Waterloo and Roger Bruggeman of Dubuque.

Crawford, who was involved in an accident that bumped him from competition at Independence the previous evening, came back to win the feature ahead of Al Mayner of Winthrop, Bob Kinsella and Roger Bruggeman, both of Dubuque, and Bob Schulte of Delhi.

Bentley duplicated Crawford’s fete, leading the pack in the sportsman makeup race with Jim Reidl of Delhi second and Gary Henderson of Independence in third.

John McLaughlin of Dubuque and Dick Chapman II of East Dubuque won heat races in the second half of the racing program, but Bentley finished first in the semi-main and then went on to win the second feature with Reidl second and Chapman II taking third.