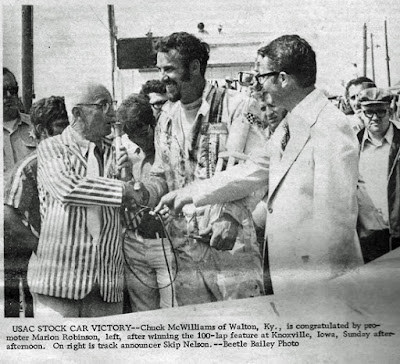 “That tire wasn’t going to last much longer,” said McWilliams, 36, who operates a auto salvage and wrecker service. “You might say I was lucky to win because of that.”

“I was just out there driving at a safe, fast pace and didn’t make a pit stop.”

A stop would have been costly for McWilliams, who has now won two USAC features this season – the first coming at Cincinnati, Ohio on May 14 – and finished third at Davenport on May 29.

One stop by McWilliams would have meant victory for Blankenship, who had to pit once for a tire change on his 1972 Dodge Charger.

And, in a race that was dominated in the first half by Iowans, Verlin Eaker of Cedar Rapids and Don White of Keokuk were the only other drivers to finish in the top-10.

Eaker, who was the fastest qualifier with 24.60 seconds started on the pole position and took the initial lead.

Blankenship was riding his bumper by lap 4 and moved into the lead on the 10th circuit. Lem shot to a 50-yard margin, but Eaker battled back and passed on the 22nd lap. Verlin, the USAC point leader going into the program, which had been rescheduled after rainout on April 29, then set out on a record-setting pace.

That came to an abrupt halt on the 38th lap when he collided with a car driven by Paul Feldner of Richfield, Wis. in a dust-filled first turn.

Blankenship shot back into command and Eaker went to the pits, losing four laps. Lem led until lap 47 when went in for a tire change and Bay Darnell of Deerfield, Ill., became the new leader.

Ramo Stott of Keokuk, who had been stalking the leaders all afternoon, pushed past Darnell for the lead on lap 73 despite smoke starting to come from his 1970 Dodge Charger.


Ramo’s reign would end three laps later, when he was forced to the pit area because of a broke oil line.

McWilliams, who had been challenging Stott for some time, took over the top spot and cruised to victory and a first-place prize of $1,600. He finished the grind in 45 minutes and 42.03 seconds, averaging 67.112 miles per hour.

Although White finished 10th, he had some moments of glory, and that came after a tire change in which he shed rain tires. “I made the wrong choice,” he remarked.

Don Hoffman of Des Moines fell out early with a blown engine. Terry Ryan of Davenport, who was second in the point standings behind Blankenship, fell out early too because of overheating.

Dan Dickey of Packwood, the third fastest qualifier, bowed out on lap 37 because of mechanical issues.