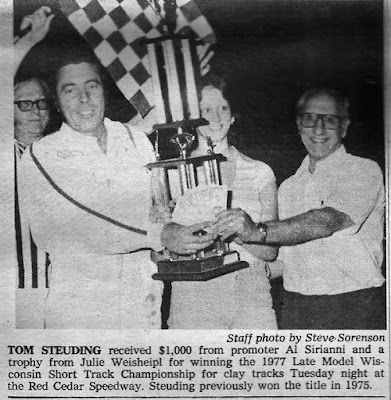 Menomonie, Wis. (June 14, 1977) – Tom Steuding guided his 1976 Camaro to victory in the 1977 Wisconsin Late Model Short Track Championships for clay tracks at Red Cedar Speedway on Tuesday night. It was a repeat win of the title he earned in 1975.

Steuding outlasted early pressure from Ron Goss and Punky Manor and three restarts to claim his sixth feature win of the season, which earned him $1,000.

Manor shot ahead of polesitter Steuding on the first lap and held on for two circuits before succumbing to Steuding’s rush on lap 3. Goss followed Steuding, dropping Manor back to third.

With the lead trio pulling away, a fierce battle was raging for fourth between Leon Plank, Bob Lawrence, Dick Trickle and Leroy Scharkey.

Plank held fourth for the first 20 circuits before Trickle picked his way into a challenging position and passed Plank on lap 21 as his Mustang began to pick up the pace.

On lap 21 Goss drifted off turn three and lost he runner-up position to Manor. Trickle was riding Goss’s bumper by the time Goss found the track again.

Then, on lap 31, Plank suffered a suspension breakdown, causing him to spin and bring about a controversial restart. As the field moved on to the front straightaway, the starter motioned for the cars to pick up the pace, displaying one finger which indicted one more lap.

When the lead cars passed the flag stand, cars started jumping spots and passing Goss and Trickle, the green flag waved. Goss and Trickle were still holding their arms out of the window acknowledging one more lap to go.

In the ensuing scramble, in turn one, Goss was pushed off the top edge of the track, but Trickle tucked in behind Tom Nesbitt, following Nesbitt through the confusion over the next lap to regain his original fourth spot.

By lap 34, Trickle had slipped by Nesbitt on the outside with some gutty driving and took off in pursuit of Manor. He closed to Manor’s back bumper on the final lap and trailed Steuding and Manor across the finish line followed by Nesbitt, Bob Saterdalen , Wendell Kuehn and a very upset Goss.

After the race Trickle said, “I couldn’t believe it. First, he signaled one more lap before we start and then with cars start passing me on both sides, he throws the green. I passed thee cars again, but it was a raw deal.”