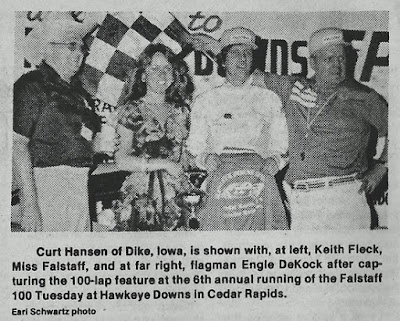 Hansen, who started on the outside pole and led every lap of the race, took the checkers for the sixth annual race then ran out of gas while loading his car.

“The gas tank holds 22 gallons and I must have been going on fumes the 100th lap,” sighed the Dike driver after becoming the first driver to win two Falstaff Classics. His first triumph came in 1976.

Even though Hansen was fortunate to reach the checkers and pocket $1,600 for winning and almost $700 more in lap money, the first 99 laps were a breeze.

He started on the outside pole after qualifying in 24.33 seconds but bolted ahead of polecat Bill Beckman on the green and was never seriously challenged.

The triumph was a welcome return to the winner’s circle because after a l0th-place finish at Tunis Speedway last Sunday, Curt felt his new No. 9 Camaro was the worst ride he’d had in 10 years of racing.

“We still don’t have power steering, but for this race we set the car up like we had it originally. The wedge had been changed and some other minor things, but only the right front sway bar was different tonight.”

“The track got a little rough, but the car ran well.”

Hansen enjoyed his biggest one-day payoff in racing. He did bank $4,600 for a two-day jamboree in Knoxville last year.

Beckman, driving the Fleck Sales Camaro, had set fast time, but had to settle for sixth in money. It was his best finish ever in the race.

“I dropped a lap when I hit a hole in the back straight,” said Horn, “and the motor killed for an instant. Our team did fine, though,” added Horn, referring to teammate Beckman’s sixth place.

Waterloo’s Bill Zwanziger, the 1974 Falstaff winner, finished third in a heat, but had to retire his Nova with a blown head gasket.

Ed Sanger of Waterloo, the 1975 winner, won a heat and then made 79 laps before he went to the pits with sheared fan blades.

There were 18 cars running at the finish and the first yellow flag didn’t come out until the 32nd tour.

A record Falstaff 100 crowd of 7,000-plus watched Joe Merryfield of Des Moines win the trophy dash, and Denny Miller of Cedar Rapids, Verlin Eaker of Mechanicsville and Stan Stover of Reinbeck won heats. Stover then outdistanced the field to win the 20-lap consolation.

Pete Parker of Kaukauna, Wis., who set fast time at the Pepsi Mountain Dew Special in Eldon last week, then won the regular feature at Oskaloosa, qualified ninth, but broke after 21 laps.

Don Hoffman, a feature winner on the fast Hawkeye Downs oval this year, broke a timing chain and didn’t qualify for the 100-lapper.