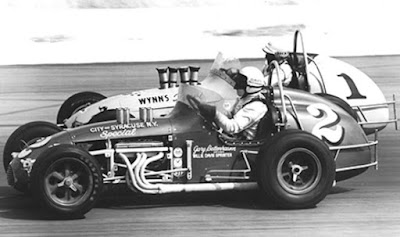 Bettenhausen of Tinley Park, Ill., thus strengthened his hold on second place in the point standings behind Dickson.

Jim Malloy of Denver, Colo., drove a brilliant race to finish second after starting in 10th position. Malloy, like Bettenhausen a veteran of the Indianapolis 500, steadily moved through the field, passing Mike Mosley, who placed third on the 26th lap. He could not, however, catch Bettenhausen who had a three-car-length lead.

Also turning in an outstanding performance was Doc Dawson of Lima, Ohio, who finished eighth after starting 19th. Dawson nearly missed the feature but an accident on the last lap of thee semi-feature eliminated two of the leaders and he was able to move into the fifth spot to claim a berth in the feature.

Fast qualifier Cy Fairchild of Saginaw, Mich., was an accident victim twice in the feature. Fairchild, who turned a lap of 18.10 seconds for the best time of the day, rode up over the wheels of another car in a first-lap tangle on the second turn, but he was able to make repairs and got back into the race.

On the fifth lap, Al Smith, Todd Gibson and Fairchild, who were all battling for third place, mixed it up on the third turn with all three being knocked out of competition. On the 20th lap, Tom Bigelow, another strong contender, was eliminated in a crash in the second turn.

Heat wins went to Fairchild, Mosley and Beale while Bill Puterbaugh took the semi-feature on a spectacular note as second and third place drivers Wib Spalding and Don Nordhorn hit the wall on the front straight-away just short of the finish line.