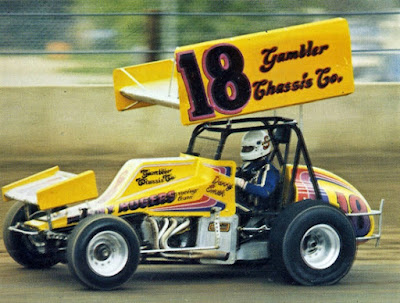 Springfield, Ill. (May 2, 1982) – Danny Smith of Hendersonville, Tenn., led from start to finish in winning the World of Outlaws 40-lap feature at the one-mile Illinois State Fairgrounds. The sprint cars were run prior to the USAC Sliver Crown program scheduled that same day.

Ferkel posted what is reputed to be the fastest time clocked on any mile dirt track in the country (27.90 seconds) during qualifications.

“I knew I had to run hard from the start because the first 20 laps didn’t really count,” said the 23-year-old Smith. “I ran as hard as I could from the pole position because I wanted to stay out in front for the last 20 laps.”

The 40-lap contest was divided into two 20-lap segments because the World of Outlaw cars aren’t equipped to hold enough fuel to race on a one-mile track for 40 circuits.

Most World of Outlaw tracks are anywhere from quarter mile to five-eighth mile ovals. The entire field was red flagged after 20 laps and restarted in single file order following the mandated pit stop.

“Near the end of the first 20 laps, Sammy was starting to catch me,” Smith remarked. “I got into a lot of heavy traffic and my tires were worn. I was able to put on a fresh set during the stop and they held up.”