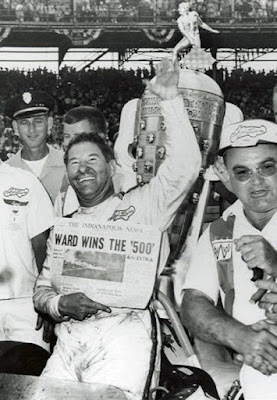 Rodger Ward waves to the crowd after winning his first Indianapolis 500.

Ward’s first Speedway victory in nine starts came with a masterful display of consistent driving by the Los Angeles veteran, who controlled the race from the 82nd lap of the 200-lap grind.

The defending champion, Jimmy Bryan, left the post late and had to quit in the second lap of the thrilling speed contest.

In beating out runner-up Jim Rathmann of Miami by 23 seconds, Ward tromped the throttle of his sleek white racer at a 135.857 miler per hour average. This broke the 1957 record of 135.601 miles per hour set by Sam Hanks.

Johnny Thomson of Boyertown, Penn., who sat on the pole position, was third in a race that had five accidents with two injuries.

The victory unofficially was worth $100,000 to Ward’s car. The driver normally receives 40%.

Only 16 of the 33 starters were still running at the finish of the race, held in warm, humid weather, which threatened rain at the start, but wound up with the sun shining as the checkered flag waved on Ward.

Ward required only three pit stops – of 23, 24 and 26 seconds – as he moved ahead of Rathmann in their battle for the national championship point lead.

The crowd of some 150,000 saw the only two former champions fail to finish.

Bryan, whose Belond Special had won two previous 500s and set the old mark of 135.601 miles per hour, couldn’t get his car fired when the pace car lined up the 11 rows of racers and sent them through the parade lap.

Finally, Bryan’s car got moving, but after circling the 2.5-mile track twice, began smoking badly from and oil leak and had to be withdrawn from the race.

The other former champion, Pat Flaherty of Chicago, the 1956 winner, was forced out of the race after hitting outside wall on the brick main stretch and careening across the track to the head of the pit area. Flaherty, who was nearly killed in a Springfield, Ill., crash soon after his ’56 victory, hopped out his car after running in strong contention for 167 laps.

At the start, Jim Rathmann, Ward, Thomson and Flaherty took turns charging into the lead. Thomson started the record-breaking tempo by holding the 150-mile lead with a 135.38 mile per hour average. Thomson also led at 200-mile mark, but the flying Scotsman later began to get a rough ride from his car when he broke a torsion bar.

After that, Ward, a former Army pilot, took charge of the roaring field, with Rathmann and Thomson taking occasional runs at him. However, Thomson’s four pit stops hurt him while Rathmann took only three pit stops but they required a total of 1 minute and 26 seconds. That was 13.4 second slower than Ward’s three stops.

Ward got a break against Rathmann when Flaherty’s crash blocked the entrance to the pits. Ward had signaled he was coming in for a pit stop, his third, just before the yellow light flashed on. Ward subsequently went into the pits, but the caution light prevented Rathmann from taking full advantage of Ward’s stop.

While most drivers were near exhaustion after the 500-miler, Ward was bubbling over and even hopped into the pace car with Sam Hanks and toured the track to the immense crowd jammed all around the course. Ward’s wife, Jo, and their little terrier joined him the car.