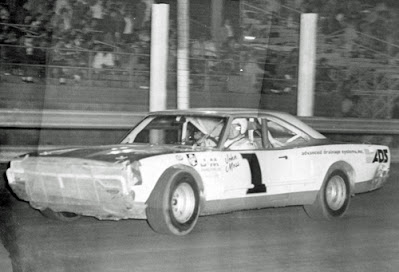 Oskaloosa, Iowa (May 10, 1972) – John Moss of Iowa City was the victor at the Southern Iowa Speedway on Wednesday night. A record-breaking field of car was on hand as 72 cars participated in the evening’s events before a capacity crowd of enthusiastic fans. Because of the great crowd, the driver’s payoff, originally set at $3,000, was raised to $3,585.

“Big” John grabbed the lead at the drop of the green and held on the entire race for the feature win in the super stock division. Moss had a fair size lead on the rest of the 20-car field when the checkers came out.

At the initial start Moss did not have the lead as newcomer Jim Gerber of Long Grove jumped in front only to have that nullified by a red flag when four cars had a mix-up between turns three and four.

The original restart gave Moss the chance he needed, and he was on his toes when the green flag dropped a second time.

Ramo Stott of Keokuk, Iowa, in his first appearance at Oskaloosa, finished a distant second behind Moss. Both drivers were piloting Plymouths.

Holding down the third spot was last week’s winner, Don Hoffman of Des Moines. Hoffman held off Stott until the final few laps when Stott managed to pass him.

Rounding out the top five finishers were Ed Sanger of Waterloo, Iowa, and Jim Gerber of Long Grove, Iowa.

Joe Merryfield of Des Moines had a look at starter Jack Thompson’s black flag when he lost his hood in the last third of the race. Joe was holding fourth place when he was forced to pull out of the race.

Hoffman, Moss, Gerber and Stott were heat winners. Because of the large number of cars, it was decided that two consolations would be run. Bob Hilmer of Dysart won the first consy while Dan Clement of Rhodes grabbed the second.