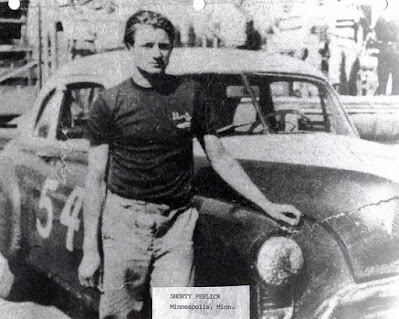 Davenport, Iowa (May 11, 1952) – Dom “Shorty” Perlick is the new holder of a new record for 100 miles in International Motor Contest Association competition, following his flashy victory at the Mississippi Valley Fairgrounds on Sunday afternoon.

Despite a muddy track, Perlick roared his stock car over the distance in 1 hour, 58 minutes and 34.72 seconds while a crowd of 3,000 watched in amazement.

The former record for the distance was held by Tommy Melvin, set at the Iowa state Fair in 1950.

Early in the race, Herschel Buchanan of Shreveport, La., and Jimmy Clark of Fort Worth, Tex., threatened to make it a three-way duel with Perlick for the championship.

However, Clark was forced to make a pit stop and after he returned to the track, the best he could muster was a 12th place finish.

The victory at the Davenport half-mile gave Perlick a full command of the leadership in the IMCA stock car point standings.

Buchanan would settle for second, followed by Bob Denny of Fort Worth, Tex., taking a distant third.