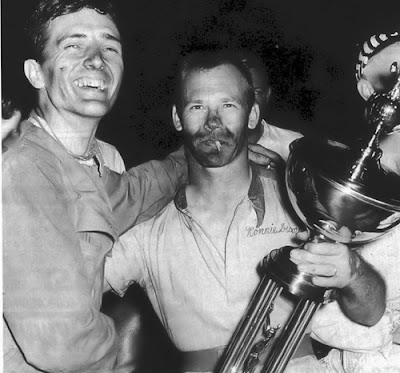 A grimy-face Ronnie Duman is congratulated by runner-up Bud Tingelstad.

Anderson, Ind. (May 29, 1959) – Ronnie Duman of Detroit, Mich., with blue flames spouting from the exhaust of his supercharged GMC all the way, took over the lead from Nelson Stacy of Cincinnati, Ohio, on the 153rd lap, and led the rest of the way to capture the sprint car classic.

Some will question Duman’s mark because Anderson’s Wayne Alspaugh, last year’s winner, ran the Little 500 in two segments and turned in a 2 hour and 7-minute mark considered unofficial.

A record crowd of over 11,000 watched Stacy take an early lead in his fuel injection Chevrolet. His yellow #17 seemed to be having things pretty much his own way, though Duman was always on the same lap and lurking not too far away. Finally, Stacy developed motor issues and Duman went ahead to stay.

Rain threatened the record-breaking crowd most of the evening, but only a few raindrops fell late in the race.

Jack Rounds, of Huntington Park, Calif., was injured when his car hit the retaining wall on the 49th lap and was struck by another “gas buggy” skippered by Hugh Randall of Louisville, Ky., sending the Californian to a local hospital where he was treated and released.