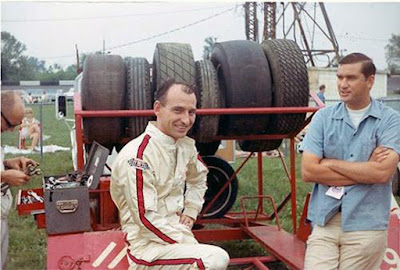 Karl Busson relaxes before the restart of the rain-delayed Little 500. He would lead the last 200 circuits to win the long-distance race.

A downpour of rain halted the race after completion of 239 laps on Saturday, just 31 laps after a four-car pileup brought the second death of a driver in the 20-year history of the race.

Harry Kern, the 42-year-old chauffeur from St. Paul, Minn., died at St. John’s Hospital less than one hour after suffering head and chest injuries in the four-car wreck.

The accident started when Steve Lehnert of North Olmstead, Ohio, got sideways coming out of the second turn on lap 208. Kern slid into Leinert’s machine and was, in turn, hit by Cy Fairchild.

Fairchild’s car careened into the infield and about that time, Chuck Lynch of Springfield, Ill., crashed into Kern’s car, rode up and over the cockpit of the Minnesota sprinter and flipped one and a half times.

Lynch’s machine came down on its side, rolled up on the wheels and burst into flames. The fire was quickly extinguished, and Lynch scrambled from the car without being burned.

Both Kern and Lynch were rushed to St. John’s where Kern died of his injuries and Lynch was treated for cuts and bruises of the left arm and shoulder.

Busson was one of four drivers involved in a heated struggle for first place on Saturday night.

Don Nordhorn of Wadesville, Ind., a rookie in the race, jumped from his outside starting position in the first row to grab the lead at the drop of starter Woody Brinkman’s green flag.

Nordhorn led for the first six laps and then he, and Ray Wright of Elkhart, Ind., the polesitter, and veteran Jerry Richert of Forest Lake, Minn., played musical chairs for the lead.

It was Wright in front on lap 7 and Nordhorn back on top one lap later on the high-banked, quarter-mile asphalt oval. Wright hit the finish line first on both of the next two laps before Richert, who finished second twice and third once in three previous appearances, got into the act and took over on lap 11.

Wright had the nose of his sprinter in front on lap 12 before Nordhorn grabbed the lead on the 13th turn of the oval.

Nordhorn began increasing his margin and Busson was steadily working his way towards the front of the field. He moved into second on lap 41, and then caught and passed Nordhorn on lap 85 to take his first lead of the race.

Busson stayed in front until he made a pit stop on lap 228 at which point, Nordhorn took over the top spot once again.

Then, on lap 238, Nordhorn blew a motor in his car and Richert took over leadership with Wright in second and Busson trailing in third.

One lap later, the skies opened, and the race was halted, and the finish postponed until Sunday.

It was Richert, Wright, Busson, Nordhorn and Wes Stafford of Vincennes, Ind., in that order when the green flag dropped Sunday evening.

Nordhorn’s crew had installed a new motor overnight which permitted the promising rookie to be back in the lineup when the racing resumed.

Busson got around Wright on lap 266, and when Richert made a pit stop after completing 300 circuits, the Toledo veteran took over a lead he would not relinquish the rest of the race.

Nordhorn moved around Wright on lap 303 to take over the second spot but was black-flagged from the race on lap 357 when his car started throwing oil.

Just 10 laps prior to that incident, Richert, the perennial bridesmaid, moved into second place, and that’s where he finished, three laps behind Busson.

Wright finished third with Darl Harrison of Tiffin, Ohio, last year’s co-champion, coming home fourth. Jim Moughan of Springfield, Ill., was fifth with Benny Rapp of Toledo, Ohio, sixth as 14 of the original 33-car field was running at the finish.