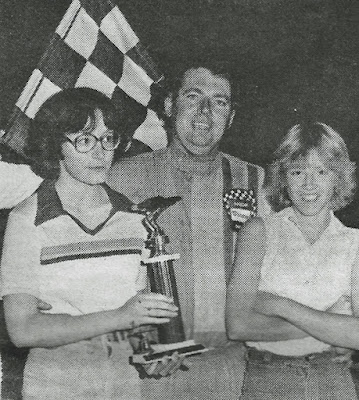 Gary Crawford was a happy man after winning the Memorial Day special at the West Liberty half-mile. - Dick Kleindolph Photo

West Liberty, Iowa (May 28, 1979) – Steve Keppler of Marion, Iowa, made just one mistake Monday night, but that one slip was enough for Gary Crawford of Independence, Iowa, to sneak through and win the $10,000 Memorial Day special at the Muscatine County Fairgrounds’ half-mile dirt track.

Keppler and Crawford started the 50-lap feature side-by-side on the front row by virtue of their fifth and sixth fastest qualifying times with the top six inverted. Keppler, starting on the pole, beat Crawford to turn one and took the lead with Crawford tucking in behind him.

They ran that way for the first 24 laps when the race was red flagged after Rollie Frink of Davenport, Iowa and L.D. O’Brien of Letts, Iowa, tangled in the first turn and hit the cement retaining wall. Although neither driver was injured, both cars were totaled.

On the restart, Keppler’s car began smoking badly as he entered each turn, but the smoke was of no apparent consequence as he was able to continue the rest of the way.

A few laps later after the Frink-O’Brien accident, however, Keppler got high in turn four, barely brushed the wall, and Crawford got shot past into the lead. From that point on, it was a four-car train to the finish with Crawford and Keppler, leading Tom Hearst of Wilton, Iowa and Ken Walton of Viola, Iowa. Dave Birkhofer of Muscatine, Iowa, was fifth, well off the pace.