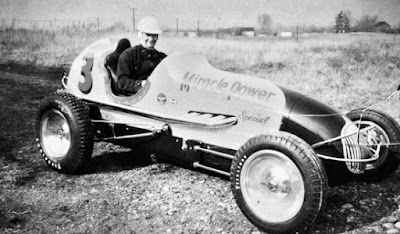 Deb Snyder of Kent, Ohio, gave a brilliant demonstration of this fact on Sunday afternoon at the North Iowa Fairgrounds before an estimated 3,200 spectators at the International Motor Contest Association big car races.

This was Snyder’s first competition of the season in his new and powerful Offenhauser racer, and he took the only two events in which he was entered. He thoroughly shattered one record in his heat event and then won the 20-lap, 10-mile distance, the first time a feature race had been run here of that distance.

Snyder, who timed in fifth fastest in qualifying, was disgusted with his showing in time trials and then then set his mind and his throttle foot to work to make up for it in his first race. Bob Carpenter of Wabash, Ind., the big winner two weeks ago in Shreveport, La., was in the same heat as Snyder but it was no race.

He toured the seven laps in 2 minutes and 57.12 seconds to chip off more than 10 seconds off the previous track record of 3 minutes and 9.92 seconds, set by Pete Folse of Tampa, Fla., last year.

After the program, promoter Frank Winkley announced that Snyder’s time was the best ever posted in International Motor Contest Association competition. The old mark was set by the late Gus Schrader in 2 minutes and 57.99 seconds at the Minnesota State Fair in 1940.

The feature race was the standout on the program and one which had a strange twist. Mason City’s Leon DeRock was leading the field with Snyder in second and Carpenter third but on the fourth lap, Carpenter’s car quit on the east turn of the track when he accidently cut off the magneto switch and the race was stopped because of the danger.

The race was restarted with the drivers holding their places and 17 laps to go. DeRock’s car had gotten hot during the stop and water was lost but he continued to stay in front and led for 12 laps as he and Snyder waged a terrific battle for the lead.

Snyder would shoot ahead of DeRock on the homestretch and DeRock decided to pull into the pit area with the temperature rising. DeRock didn’t want to risk any further damage to his Offenhauser engine.

It was Snyder’s race in a walk for the remainder of the race. Carpenter, who was sent to the rear of the field after his car conked out, fought back from last place after the restart to finish second with Jim McWithey of Anderson, Ind., taking third.

Pete Folse of Tampa, Fla., who was running among the leaders early on, dropped out on lap 12 when a flying rock hit his arm.