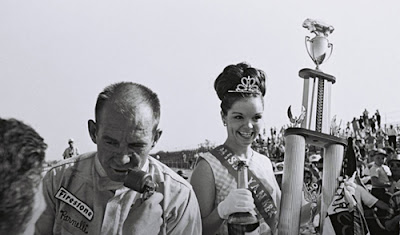 Parnelli Jones is interviewed in victory lane after winning the Yankee 300.

The Torrance, Calif., veteran beat Mario Andretti of Nazareth. Penn., one of his principal opponents in the 500 by about one mile over the 1.7-mile 7-turn road course. Both drove 1967 Fords.

The Ford was the same car with which Jones won the Riverside 500 race in California last January.

“It ran good then and ran just as well today,” he said.

Jones passed Don White of Keokuk, Iowa, who had set a qualifying record of 102.552 mph in the first lap. He gave up the lead only once, yielding briefly to Nelson in a pit stop.

Nelson, who had won the event two straight years, was stopped by engine failure.

Andretti might have made it close had he hadn’t spun into the grass apron early in the race and lost valuable time.

Paul Goldsmith of Munster, Ind., whose qualifying record of 100.476 mph was broken by White, was also sidelined with an ailing engine while running in second place for two-thirds of the contest.

Other 500 starters besides Jones and Andretti had indifferent success.

Former winner A.J. Foyt of Houston, Tex., charged from fifth to second position and then parked with a smoking engine. Al Unser of Albuquerque, N.M., tried stock car racing for the first time and spun out on the second lap, damaging his car.

The race was run in 90-degree temperatures and the hot flat turns combined with broke concrete on the course to force a parade to the pits for tire replacements.