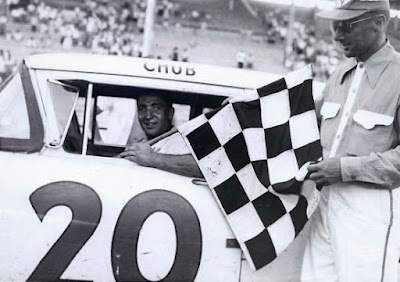 Knoxville, Iowa (May 27, 1962) – Chub Liebe of Oelwein won the 200-lap late model stock car race and $525 here Sunday afternoon before 3,481 fans as his nearest competitors ran out of gas in the late stages.

Liebe finished two laps ahead of Keokuk’s Dick Hutcherson in the 100-mile contest, sanctioned by the International Motor Contest Association. Both drove 1962 Fords.

Although the half-mile dirt track was heavy, Liebe drove the distance in 1 hour, 33 minutes and 49.53 seconds – an average of more than 62 miles per hour. It equaled his accomplishment of last season – a 100-lap triumph at Cresco.

There wasn’t a driver who could go the distance without refueling. Liebe refueled early, then took the lead away from John Mickey of Columbus Junction on lap 75.

Errors in judgement at the pit stops – insufficient fuel to cover the remaining distance – put Liebe’s chief challengers out of action.

Ernie Derr of Keokuk, the four-time IMCA stock car champion whose 28.55 seconds was the fastest qualifying mark on the half-mile, was running third when his tank went empty on lap 184. He coasted to the pit area, refueled, and eventually finished a disappointing seventh.

While Derr was refueling, Hutcherson moved up a notch behind Liebe and Johnny Beauchamp of Atlantic.

Beauchamp was still in second place when he ran out gas on lap 198, nearly a half-mile behind Liebe. Beauchamp exited for the pits, allowing Hutcherson to move into the runner-up position.

Mickey, who led through most of the early laps, was the victim of misfortune in the pits. After refueling on lap 135, he returned to action – only to learn that his crew had filled his tank with water, not gas. He had to settle for 15th place.