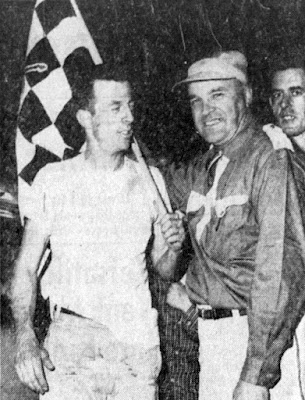 Shreveport, La. (May 5, 1958) – Stock car drivers on the International Motor Contest Association circuit have been issued a verbal challenge by former IMCA national champion Don White, winner of the 1954-55 speed titles, White, an automotive parts dealer in Keokuk, Iowa, predicted a few days ago that he will return to the stock car throne this year.

At the same time, he told some of his competitors that he would be the man to beat in the annual Gulf States 100-miler.

Monday night it was White who blistered the Louisiana State Fair Speedway to take his third Gulf States championship. He blazed into the lead on the second lap and later lapped the field of 14 drivers. A pit stop narrowed his lead with Bob Burdick, the 22-year-old daredevil from Omaha, Neb., battling to overtake the champion.

The race was exciting with several mishaps marring the chances of other drivers. Eddie Schultz was temporarily sidelined by the loss of his wheel on lap 49 and Beauchamp’s car caught on fire and was put out of action on lap 90.