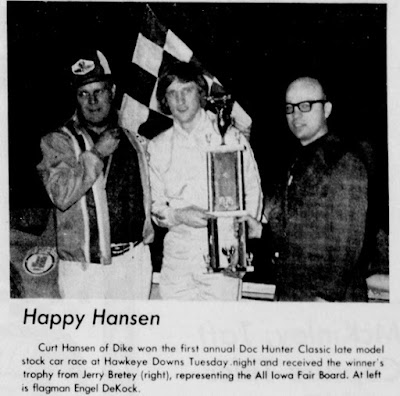 Hansen, the Dike hot shoe whose boyish good looks belie his 31 years and 13 seasons on the dirt track circuit, started on the pole for the 35-lapper and immediately opened a lead that sometimes stretched to an eighth of a mile.

He put so much distance between himself and the rest of the field that the ground made up by second-place finisher Roger Dolan of Lisbon and third-place Ed Sanger of Waterloo seemed paltry by comparison.

Hansen owns his own ride, a 1975 Camaro, along with his father and brother and he was quick to give them full credit for his $1,000 payoff winning the All-Iowa Fairboard’s dedication race for the new half-mile dirt oval.

“I smashed the car Sunday at Waterloo, and the frame was in terrible shape. We had it on the frame machine all day Monday and when we quit working on it late Monday night, we had almost given up hope for competing in this race,” he explained.

“In fact,” added the Dike, Iowa, flash, “we really didn’t have the car in proper working order until three o’clock this afternoon (Tuesday). We rushed around so fast that I though all through the race that we probably had missed tightening a bolt somewhere and something would break.”

“The car has been running very well and even though we haven’t won too many features this year, we’ve been more consistent and always in the top three or four finishers.”

All was not sweetness and light, however, and controversy swirled around on of the Downs’ most popular drivers, hometown hero Darrell Dake.

Dake had apparently secured himself a spot in the trophy dash by posting the eighth fastest time in trials (Hansen was the leader at 25.20 seconds) and proceeded to steam away from the field to earn that prize.

During the heat races, though, it was determined that Dake had taken three green flags in time trials and only two are allowed. Therefore, his car was stricken from the feature field because his first time trial was too slow.

Relegated to the consolation, Dake breezed away from the pack to win that 15-lapper.

“I took my first green flag trial, but on the second, she slipped out of gear and I pulled off,” explained Dake, who readily admitted that he had indeed, gone out a third time.

“Rules are rules, I guess,” said a bitter Dake. “But I won’t be back here Friday night for the regular program.”

“I’m going back to Davenport where the track is 100% better.”

Dake had missed the last two Downs’ Friday night programs attributing that to the poor physical condition of the rebuilt oval.

Ironically, the local favorite furnished a gentlemanly gesture after winning the trophy dash, presenting it to Doc Hunter himself. The race was dedicated in Hunter’s name for his longtime affair with racing at Hawkeye Downs.

Hansen disagreed that the track was as bad as Dake maintained.

“It may be a little rough but it’s going to take a year for it to settle. You can’t build a track overnight and expect it to be letter perfect. At least you can pass and that’s important from a fan’s standpoint.”

Only 15 cars started the feature and one of those was Keokuk, Iowa’s Ramo Stott, who seldom will miss an opportunity to run at the Downs. A paid crowd of 2,940 watched Red Dralle of Waterloo, Mike Frieden of Fairfax and Duane Steffe of Colona, Ill., win heat races.