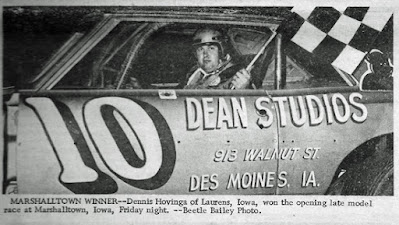 Marshalltown, Iowa (May 12, 1972) – With threatening weather prevailing, Denny Hovinga of Laurens, Iowa, opened the 1972 racing season at Marshalltown on Friday night, recording a triple win on the high-banked Central Iowa Fairgrounds’ quarter mile.
Hovinga began the evening with a victory in the late model first heat, repeated in the A semi-main, and then captured the 20-lap feature.

Starting on the pole position, Hovinga’s Chevelle immediately jumped into the lead, and he continued to set the pace throughout the event as the rain began falling.

Hansen did, however, score a win in the third heat, with Marshalltown’s Mike Keen scoring the victory in the second heat. The sportsman champ from last year, Waterloo, Iowa’s Keith Braun, bested a top field of late models in the B semi-main.

D. Arthur Nesteby of Waterloo made a good showing in the feature, finishing third. Keen followed in fourth and Tom Bartholomew of Waterloo, Iowa, rounded out the top five.

Red Dralle of Waterloo, Iowa, was running a strong third in the feature until a flat tire forced him to the sidelines with less than two laps left.

One of the top drivers in the sportsman division in 1971, Jim Rader of Newton, Iowa, captured the feature race.