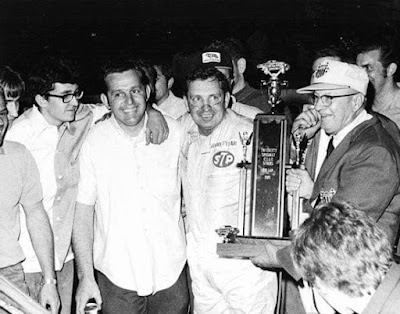 After all, the Bowsher clan has pretty much dominated stock car events here this season.

After starting eighth in the 19-car main event, Jack moved his way through the field quickly, took the lead and never looked in his rear-view once, breezing to the checkered flag.

After the race, Bowsher admitted that he had learned something about the Tri-County dirt surface from Jim’s success earlier.

“I’d rather not say what kind of tires we used tonight, “Bowsher said. “But when Jimmy ran here, we tried three different sets of tires. We still didn’t have the right one’s on when we won it, but we learned a lot.”

Bowsher’s 1971 Ford Torino crossed the finish line almost a third of a lap ahead of Don White of Keokuk, Iowa, the two-time USAC national champion in a ’69 Dodge. Verlin Eaker of Cedar Rapids, Iowa, driving a ’69 Dodge as well, finished third.

Dave Whitcomb of Valparaiso, Ind., was fast qualifier in his 1970 Dodge Charger, turning the Tri-County half-mile in 22.18 seconds.

Butch Hartman of South Zanesville, Ohio, won the fast car dash in his ’69 Charger but was forced out of the feature on lap 82 when he lost a battery.