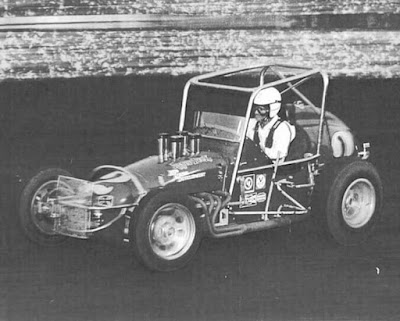 Knoxville, Iowa (May 16, 1970) - It was Joe Saldana night at the super modified season opener at the Marion County Fairgrounds in Knoxville Saturday night. Saldana, from Lincoln, Neb., was anxious to race after pulling to Knoxville the last two weeks only to find the races cancelled due to rain. In a new car with a new number, Joe captured the 25-lap super modified feature, the trophy dash and his heat.

Saldana took the lead on the third lap and continued leading to the 25th lap and the awaiting checkered flag. Seemed that nothing could stop him as he won by a considerable margin over the rest of the field. Dick Sutcliffe from Kansas City, Mo., finished second ahead of Jerry Blundy of Galesburg, Ill., in third spot.

On the field of 31 supers, Jerry Blundy set the fastest time of 22.11 seconds around the one-half mile oval in his red #33.

The trophy dash was won by Joe Saldana. Saldana fought off the challenges of Ray Lee Goodwin of Kansas City for the trophy. Bill Utz was third and James Bond, fourth.

Saldana then put his red #2 super into the first to cop the first 10-lap heat by a wide margin. In second was Jay Woodside. Stacy Redmond of Mason City placed third followed by Flea Atkins.

Dick Sutcliffe took the lead on the first lap and was never headed to cop the second 10-lap heat. Sutcliffe was leading by one-fourth lap ahead of the second place Lennie Jensen at the checkers. Keith Hightshoe finished in a very close third.

The only flag of the evening came on the first lap of the second heat when newcomer Jay Opperman of Beaver Crossing, Neb., flipped wildly over the third turn fence, landing some 80 feet from the track. Opperman lost his life in that accident and the Van's Mobile Home Special super modified was totally demolished.

Officials said Opperman's car struck the wheel of another auto in the first lap of the second heat.

Ralph Blackett of Des Moines grabbed a good-sized lead to win the third 10-lap heat event. In the battle for second spot, it was Wib Spalding finishing second. Next across the finish line were Del Schmidt, Jerry Blundy and Bill Utz.

Bill Utz led all the way to victory in the 10-lap consolation. James Bond was second and Roger Abbott of Lincoln, Neb., in a close third. Following were Bob Fisher of Des Moines, Curt Houge of Ames, Steve Schultz of Chillicothe Mo., and Bruce Sommerfeld of Fort Dodge.