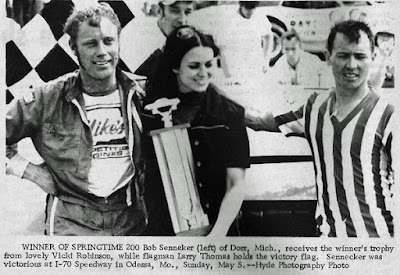 Odessa, Mo. (May 4, 1974) – Bob Senneker showed everyone at I-70 Speedway’s high-banked oval who had the fastest car when he shattered the one-lap record in qualifying Saturday night, then went on to best a field of some of the fastest stock car drivers in Mid-America in winning the 200-lap feature, the Springtime 200.

Senneker started on the pole but lost the lead to Tom Maier, driving a 1973 Camaro. Senneker chased Maier until lap 61 when he pitted for fuel. Terry Brumley of Springfield, Mo., driving a 1968 Camaro then took over second place. Brumley would take the lead when Maier pitted on lap 76, but Senneker slipped by Brumley on lap 104 and then led the field the rest of the way in winning the $2,500 first prize.

The yellow came out 11 times during the race, as the torrid pace used up tires and engines.

“I think good fortune can be credited as the reason we were able to win today,” Senneker remarked. “The car hooked up great for qualifying, but the engine was running sick at the end, the others just happened to have more trouble than I did.”