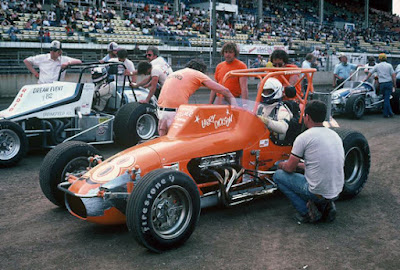 Front-row starters Larry Dickson (18) and Keith Kauffman prepare prior to the 100-mile Silver Crown race at the Springfield Mile. Dickson would go on to score the victory over Ken Schrader.

Springfield, Ill. (May 2, 1982) – What a difference a year can make. At least, that’s how three-time USAC sprint car king Larry Dickson views his racing career.

“It’s been a year since I was able to finish a dirt car race. But it seems like it was worth it now,” Dickson told a crowd of 6,000 at the Illinois State Fairgrounds after winning the United States Auto Club’s 100-mile Silver Crown contest.

“Last year it seemed like every time out, I’d blow an engine,” he continued. “I just couldn’t get it going. Late in the season, I was running last in a race when I decided to park the car and call it a season because I did not want to ruin my record of not finishing a race. So far, things have worked out differently this year.”

Dickson, who recorded the fastest time (32.845 seconds) in Saturday’s qualifications, used the pole position to his advantage as he held the lead for the first 79 laps of the event’s 100 laps. Not bad for a guy whose car was running on only seven cylinders for most of the race.

“I lost a cylinder at some time, but it didn’t really hurt me any,” said Dickson, who averaged 99.217 miles per hour. “It did take speed away from me in the straightaways but actually helped me a lot in the corners.”

Second-place finisher Ken Schrader, who finished one second behind Dickson, said he knew the lost cylinder would not hurt Dickson.

“He wasn’t in any trouble,” Schrader said afterwards. “When the track gets as slick as it did today, a dropped cylinder doesn’t hurt at all.”

Schrader took the lead on lap 80 when Dickson had trouble lapping a slower moving Rich Vogler.

“I tried to pass Rich down low and got into some loose dirt,” Dickson remarked. “All of a sudden, I saw a lot of dust flying and I thought I had lost a tire and was ready to pull in. I slowed down and that’s when Ken got by me.”

But six laps later, a similar thing happened to Schrader and Dickson capitalized, moving back into the lead, this time for good.

“I got into some loose dirt in turn one and dropped out into the boonies,” Schrader said.

Of the 24 cars that started, 15 were still running when the checkered flag dropped.