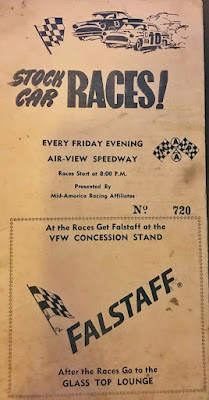 Monticello, Iowa (May 18, 1967) - The racing season officially opens in Monticello at Air-View Speedway Friday night at 8 o'clock, according to Independence Racing Association officials.

Races are now being held at Independence on Saturday nights and at Tunis Speedway in Waterloo every Sunday night.

The Monticello VFW will handle concessions and the drill team will be in charge of parking and policing. The Monticello Fire department will provide an ambulance and fire protection at every race.

Local drivers who will be back in action are Tom Hughes, who returns with his 1964 Ford and Al Iben, back with his 1961 Ford.


Many of the old veterans of this area will be back in revamped cars and several new cars and drivers will be showing up on the three ovals. Dave Noble is working on a 1964 Chevy and fellow Minnesotan Joe Wurst a 1963 Chevy.

Hard luck driver of 1966, John Hill, will try to change his luck in a 1966 Chevelle while Ty Burger, rookie of 1966, will open his second season of racing a 1965 Chevelle. Bob Hilmer of Dysart and Dick Heiden of Cedar Rapids will be piloting Chevrolets. Red Droste, Waterloo, will be driving a ‘66 Chevrolet also, report racing managers.

Chub Liebe of Oelwein, 1966 season champion, will be heading up the Ford operators this season along with Curt Hansen of Dike who has deserted his Pontiac for a 1964 Ford. Karl Sanger, Waterloo, a newcomer to oval racing, will move into the stock car circle from the drag strip ranks in a 1962 Ford while his brother, Ed Sanger, will be back with his Pontiac GTO.

Buzz Jensen purchased a 1962 Ford in the Chicago area and hopes to give some competition to Bill Zwanziger on the three-track circuit. Bill's 1964 Ford served him well in the last season and his mechanic, Roger Beck, says the car has been completely rebuilt and is expected to go even better than ever. Glen Martin, Waterloo, will have last year's Oldsmobile with it too being completely rebuilt from bumper to bumper.