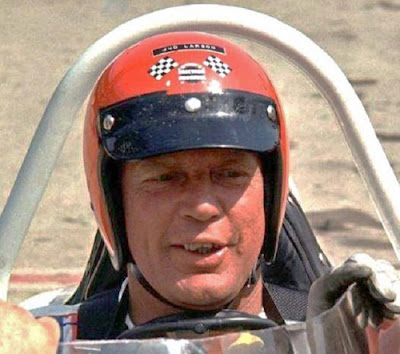 New Bremen, Ohio (May 31, 1964) – It was A.J. Foyt Day here Sunday. Nothing official, but the 5,300 race fans in attendance at New Bremen Speedway gave the Indianapolis 500 winner a rousing welcome.

Foyt, in return, made sure the crowd got its money worth, as his famed #2 sprint car ran away from every car on the track in the USAC sprint car race.

Although most of the 30 cars entered in Sunday’s event had finished with warm-up laps – Foyt’s blue and white sprinter had yet to arrive from Indianapolis.

The champ prowled the pit area in the infield, intently watching the gate in the retaining wall. Finally, the gate swung open to admit a station wagon, which pulled a fancy trailer. The sight of the car and trailer brought much of the crowd to their feet.

While the time trials got under way, Foyt's crew poured over the car, and the champion checked the plugs and adjusted linkage, with still no announcement whether or not he would drive.

Don Branson, another veteran of Indianapolis racing, turned the half-mile oval in 19.25 seconds for the fastest time of the day. Johnny White, who finished fourth in the 500, ran the second-best lap in time trials at 19.36 seconds, well off Parnelli Jones’ 1962 record of 19.12 seconds.

When the Foyt car finally made its run for the timer, the rugged veteran of the dirt track circuit, Jud Larson, was at the wheel, and the big redhead roared to the third fastest time – 19.48 seconds.

Starting the first heat race was Larson, White, Jim Hurtubise (in Johnny Rutherford's car), Don Branson. Mario Andretti and Mickey Rupp. All had turned time trial runs of less than 20 seconds. Larson ran away from the field, setting a new track standard for the 8 laps (2 minutes and 39.41 seconds), eclipsing the mark of Roger McCluskey (2 minutes and 40.15 seconds) that stood for nearly two years.

Andretti, a rookie on the USAC circuit, came on strong in the second heat, finishing ahead of Branson. Arnie Knepper of Belleville, Ill., driving a Chevy-powered car, sped to the win in the third heat.

The 10-lap semi-feature followed, with Gordon Johncock in the Fetter’s Special speeding to victory ahead of Chuck Arnold and Chuck Booth.

Lining up for the 14-car feature, Larson sat on the pole. Foyt took the wheel of the pace car, and after a couple of false starts, the race got underway. Larson immediately jumped to a healthy lead, followed by Andretti, and the pair lapped nearly the half of the field in the 30-lap main event.

Larson was awarded $850 in prize money.