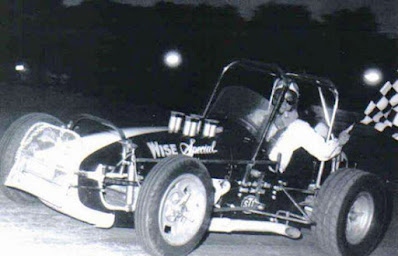 After surviving a pair of spins, Wise lapped cars like he was the only horse on the merry-go-round. The Atlanta, Ga., driver went from pole to pole after turning the night's quickest lap as nearly the last qualifier.

“This is a brand-new car,” said Wise as he chatted with fans after the race. “I turned the crank on it yesterday (Thursday) before I left home just to see if it would run. We have some things to do to the car before it's really ready, though.”

Wise and his brother form a team. They formed the team out of necessity.

“We don't have any place to run sprints down home,” drawled Wise like a true rebel.

“Everyone has gone to the late models, and I just don't like the stocks that well.

My brother was able to help me with the financing and we have a mechanic to turn the wrenches just the way we like, so here we are.”

“We just go where the money is and I like Indiana money as well as any. I've got a lot of work to do before we get ready to take it to Pennsylvania. They’ve got some hot ones over there and we're not ready for them yet. But we will be,” Wise vowed.

Wise had an oil problem midway in the race but a few laps under the caution light was all he needed to cure the ill. He ran the final 10 laps like a trophy dash, and no one was about to catch him.

Lee Brayton of Coldwater, Mich., put his STP Special through the guard rail in the fourth turn in qualifications and snapped a piece of the frame near the left front wheel.

Brayton and his crew had a lot of work ahead to bend a piece of tubing to replace the broken piece of frame. They also needed to cut the front axle to insert a plug. The axle was also damaged in his time-trial spin.

Buzz Gregory of Indianapolis, the popular winner of last year's Little 500, had magneto trouble and never got untracked.

“We did some welding on the mag,” said Gregory, “and when you do that, you lose all the magnetism. We tried to find another one tonight but couldn't. We had what we needed at home but that didn't help.

Butch Wilkerson of Bloomington also had magneto problems and did not run Friday night. Wilkerson never actually got his car running and jokingly told bystanders that his fast lap was “when the push truck took me all the way around.”