1980 – Gundaker Wins as Engine Conks Out 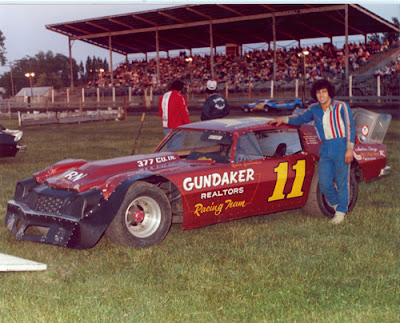 The opposite was true on Wednesday night as out-of-state drivers took control of the NSCA feature at the Southern Iowa Fairgrounds.

Kevin Gundaker of St. Louis, Mo., led from lap 16 to capture the 30-lap feature over the big half-mile track. Pete Parker of Green Bay, Wis., was second and Bob Kosiski of Omaha was third.

The first Iowan to finish was Bill Moyer Jr. of Des Moines who finished fourth.

Gundaker won by about 50 yards despite that the engine in his Camaro blew on the backstretch of the last lap.

“I had to back off,” Gundaker remarked afterwards. “I only brought one engine with me and I still want to race at Cedar Rapids this weekend.

The car was smoking badly when the car coasted to a stop on the front stretch. “The oil pressure light flashed on when I entered the backstretch.”

Don Hoffman of Des Moines, the NSCA point leader, finished sixth and retained his lead in the standings.

Kosiski led the first lap before Parker took over on lap 2. He was passed on lap 16 by Gundaker, who is the point leader at Tri-City Speedway in Granite City, Ill., where he races weekly.