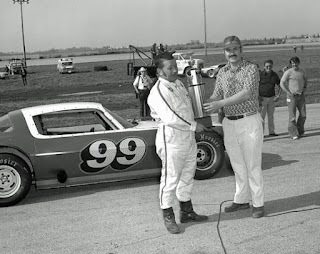 Ray Young is presented his trophy by ARTGO's Art Frigo after winning the series opener at Grundy County Speedway.

Morris, Ill. (May 9, 1976) - With most of the top drivers in the Midwest assembled at the Grundy County Speedway Sunday afternoon for the CAM 2 Motor Oil Classic, it turned out to be a familiar face in the winner’s circle as Ray Young of Dolton won the 100-lap race by one car length over Bob Senneker of Dorr, Michigan.

Young took the lead in lap 32 when Dick Trickle dropped out of the race. Bobby Allison, the featured driver Sunday in the ARTGO Racing promotion, dropped to seventh in the final standings after having his door ripped off in the early going.

Senneker posted the fastest time of the afternoon in the qualifications before a standing room only crowd under ideal weather conditions. His time of 16-seconds was a new record and Randy Sweet and Joe Shear also qualified in under the old record of 16.16 seconds.

With the large crowd on hand, promoter Art Frigo of ARTGO Racing declared a bonus to the drivers with all of the feature starters receiving an extra $50. Young’s winnings were $1,650 for the afternoon.

Tony Izzo of Bridgeview led the first nine laps of the Classic but then pulled out with a blown engine calling for the first of the event’s two yellow flags.

Two-time Grundy champion Tom Musgrave took the lead at that point with Trickle passing him in lap 21 for the top spot. When Trickle dropped out in the 32nd lap, Young shot in front and won the rich race much to the delight of the home track fans.

At the half-way point, Young held a commanding lead over Joe Shear, Musgrave, Dave Watson and Senneker. In the final 50 laps Senneker made his charge to the front, but even a yellow flag for Bob Strait’s spin the 70th lap couldn’t give Senneker enough advantage to catch Young at the checkered flag.

Joe Shear finished third in the Classic with Musgrave fourth followed by Tom Reffner of Rudolph, Wis., Dave Watson of Beloit, Wis., and Allison, of Hueytown Ala. Ed Hoffman was eighth, a lap down followed by Rusty Wallace of St. Louis, Mo., and Jerry Kemperman of Blue Island.

Following the race Young said this was his biggest win ever and also said he was glad “a local guy finally won a big one.”