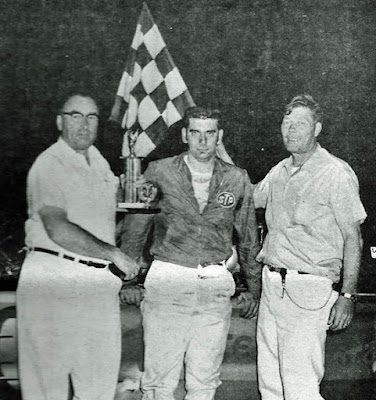 Fred Horn is congratulated by co-promoters Homer Melton (left) and Johnny Beauchamp after his season opening win in Des Moines.

Des Moines, Iowa (May 3, 1969) – Fred Horn of Mario guided his 1967 Plymouth to victory in the 25-lap late model stock car event in the season opener at the Iowa State Fairgrounds on Saturday night.

Don Hoffman of Des Moines won the sportsman feature before a crowd estimated at 6,500.

Horn trailed John Connolly of Delhi by less than a car length the first 13 circuits, then grabbed the lead coming out of turn three. He never relinquished the top spot for the remaining laps.

The sportsman feature was a battle for survival as 15 cars started but only three finished the race.

There was a spectacular crash in the sportsman semi-main involving four cars. Ed Perryman of Des Moines careened into Lynn Komrie’s car which was leading.

Perryman’s car skidded out of control, rolled twice, and caught on fire. He scrambled from the burning wreckage unscathed.