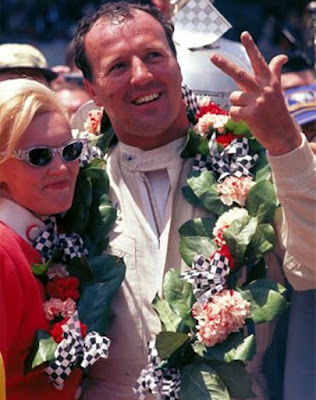 Indianapolis, Ind. (May 31, 1967) – A.J. Foyt, the “Texas Tornado,” won his third 500-mile race at the Indianapolis Motor Speedway on Wednesday afternoon after Parnelli Jones’ turbine car quit running on the 197th lap when the transmission failed.

The 32-year-old Foyt, only the fourth man in Speedway history to win the prestigious race three times, charged from second place after Jones retired to capture the 51st running speed classic.

In an incredible windup toa bizarre race, which was postponed by rain on Tuesday, Foyt – who ostensibly settled for second place behind the record-smashing Jones – suddenly was handed victory when the sleek red turbine quit and limped into the pits.

Foyt, who had previously won the 1961 and ’64 race, snaked through a spectacular five-car homestretch crash on the last lap.

Had Jones, whose wonder car was stricken by a broken gear box, been able to finish, the record would have been smashed by about an average of two or three miles per hour. His “Silent Sam” turbine relentlessly had re-written the Indy record book, lap after lap until his stunning breakdown.

Foyt built both the winning car and Leonard’s. they will receive a major share of the Speedway purse of approximately $750,000.

Other top contenders to finish in the big money included Australian Dennis Hulme, a rookie who finished fourth in the #69 Daytona Beach Special.

Fifth place went to Jim McElreath of Arlington, Tex., who was making his sixth run at the “500” in the #2 John Zink Special.

Graham Hill of England, last year’s winner, had miserable luck and washed out of the race after only 75 laps.