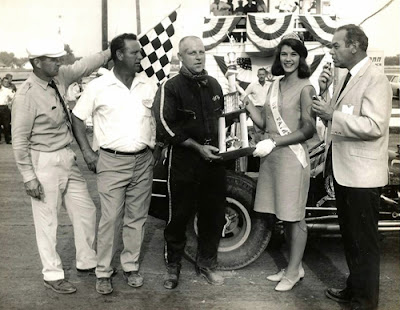 Bill Utz accepts his trophy after winning the annual Jaycee's race on his hometown track.

After battling Joe Saldana of Lincoln, Neb., who won the pole position in the morning super modified time trials, and Jay Woodside of Kansas City for the first 10 laps, Utz grabbed the lead on the 13th lap and held on for the rain-shortened victory.

The super modified feature had gone a total of 19 laps of a scheduled 30-lap feature, before the rain began.

In addition to winning the main feature, the flying blacksmith captured the fourth heat race, ran second in the trophy dash and placed second in the time trials

Rain forced cancellation of the consolation super modified feature and the feature event for the late models.

This is the second year in a row for the Jaycees that rain has forced the racing program to an early halt.

A total of 84 cars timed in during the morning; times were not nearly as fast as last year, but the track half-mile mark was topped by Joe Saldana, who turned in the fastest time of the super modified qualifiers He turned the oval in a clocking of 22.67 seconds, this eclipsed the old mark set last year during the Jaycees event.

Utz turned in the second fastest clocking with a time of 22.93 seconds.

In the field of 60 plus super modifieds, two notable pilots were absent from the feature event Jerry Blundy of Galesburg, Ill., and Roy Hibbard of Marshall, who was the defending champion of that division.

Neither, driver was able to place in the top 20 during the time trials, the only way the drivers could qualify for the feature events.

In the super modified trophy dash event. Jay Woodside won the race finishing ahead of Utz and Bobby Ward of Conway, Ark.

Utz's feature win netted him $600. That was $100 more than Roy Hibbard pocketed last year for winning the event.